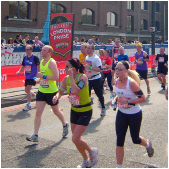 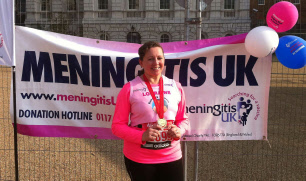 Lorraine Kinght ran this year’s London Marathon For Luice.  She tells us about her experiences and the big day itself.

I was extremely moved and saddened by the heartbreaking tragedy that struck Jon & Trish as a Mum myself, I feel truly blessed to have 3 beautiful healthy children, and no parent should

never have to suffer what Jon and Trish have gone through.  Therefore, I really wanted to do something positive to help them, and the only way this was possible would be to assist them in their fantastic endeavours to raise money for Meningitis UK, hence my decision to run the Flora London Marathon 2011.

I was delighted to discover on 10th January this year that I had secured a Golden Bond London Marathon place with Meningitis UK, and therefore with just under 14 weeks till the big day, the training and fund raising began in earnest!!

Training itself was a gradual process, I gave up my occasional glass of wine completely, ate healthily and ran daily short runs mid week and saved my longer runs till Saturday, (giving me more time to recover before work on Monday)!!   Having a goal and a fantastic reason to train, was incredible motivation and gave me the strength and determination to go out & run on those dark early mornings, lunch times or after work and also build on those long Saturday runs, even when the weather was not in my favour.  My training regime saw me clock up 57.4 miles in January, 102.7 in February, 112.8 in March and tapering to 61.4 in April.  One of the added benefits was the weight loss and toned up body I achieved in the process!  (Sadly, despite best intentions,  I haven’t maintained it post Marathon…..)!!

April 17th dawned as an extremely warm day.  Fantastic for the crowds basking in the sunlight, but not so good for the runners, but proudly wearing my ‘ Running For Lucie’ T Shirt and armed with iPod, I hit the streets of London with the thousands of others, all running for their own special causes.   I was rather alarmed though, to see a lady being stretchered off the course at mile 4.  Even the more elite runners seemed to be dropping like flies due to the heat, and I saw many a person being attended to by St. Johns Ambulance or those who had collapsed being wrapped in foil blankets.  However, with Baby Lucie and her family in my mind and the support of my amazing family who met me at various points through London, plus all the wonderful supporters around the route, I kept a slow but steady pace & finished in a fairly respectable time of 6 hours 40 minutes and 37 seconds.  For me it was never about the speed and the time but completing the 26.2 miles, and justifying  those all important funds that people had so kindly donated.

The day itself was fantastic but crossing that finish line is such an amazing feeling, and a culmination of all the hard months of training.  It was wonderful to meet up with Jon Page at the finish and have an opportunity to speak to Trish. I really appreciated their support.

The response to my fund raising was amazing!  Having secured a Golden Bond running place through Meningitis UK I was obliged to raise at least £1,500.  I am proud to say that through the fantastic support of family, friends and colleagues, including a couple of cake sales in the office, the fund raising total on paper was in fact £2,000, with the promised donations still trickling through!

I wish Jon, Trish & little Francesca continued success with their continued fund raising, and I hope too, that many others will  get involved in any form of fund raising activity for this wonderful charity.  Together we can & MUST help Meningitis UK eradicate this terrible disease in memory of Baby Lucie. 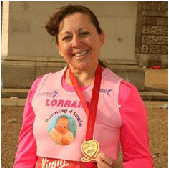 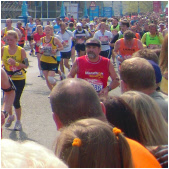 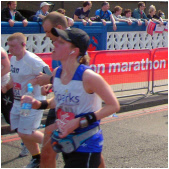 The crowds turn out to show support