4 intrepid runners took part in one of Lincolnshire’s tougher 10k runs at Grimsthorpe Castle over the August Bank holiday weekend in 2011.  The Grimsthorpe 10k is organised and run by Bourne Harriers and is one of their tougher races of the season.  Early in the spring of last year Katie Dexter, David Lyons, Trish & Jon Page decided to take on the run and the training started in earnest!

Come race day and the 4 competitors were keen to get stuck into the undulating course!  The weather was blustery and quite chilly for August but undeterred they started the run!

This is a popular run and there were over 160 competitors that took on the all terrain course.

Triumphant as they cross the line

And they’re off - will they make it round?

No lap of honour - just a team photo 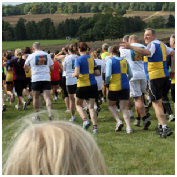 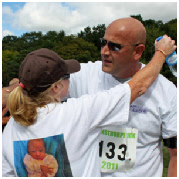 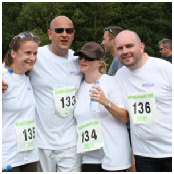 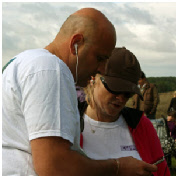 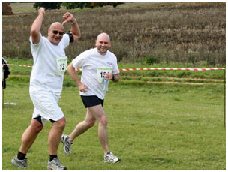 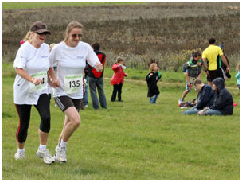 Trish who crossed the line with Katie was elated and later said “ It was hard but running with the others made it easier - so pleased I beat Jon though - he will never live that down!”

Would they do it again?  Well Trish is expecting in May and is looking for a goal to get fit so it looks like Grimsthorpe 2012 will make the perfect goal!

They were cheered on by about 20 loyal supporters of friends and family alike.  What makes Grimsthorpe a great day out is that its part of a bigger music and craft festival with the highlight being a fly past of the WW2 memorial flight.

David came top out of the group of 4 with a time of 49 mins and Jon shepherding them home in a time of 1:06 mins.  The four of them raised over £1400 For Lucie and were incredibly pleased with the fundraising.  Jon said “It was quite a tough  course but we were all so pleased with the support – especially over the last mile as it was all up hill and over very bumpy terrain”