There are a number of ways that you can contact us or keep tabs on what we’re doing. 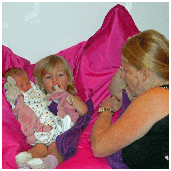 Lucinda Florence Mary was born a happy healthy little girl and sixteen days later she tragically was taken from us by Group B Streptococcal Meningitis. We would like to share her story to raise awareness of how fast this disease can take lives........

Trish fed Lucie at 1:30am in the early hours of Sunday 31st October 2010, she fed well but started to cry afterwards and took a while to settle, which was so unlike her, it seemed like a painful cry but she was not hot, or showing signs of colic. Trish and Jon cuddled her and she eventually went back off to sleep about 3:00am.

Lucie woke up at 7:30am and as Trish lifted her from the moses basket she felt hot. Her temperature was 39.9 and Jon and Trish stripped her off quickly and cooled her down. Her temperature 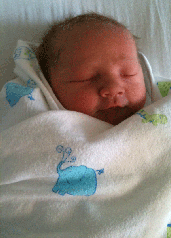 dropped and stabilised at 37.6. Lucie did not feed well, and looked a little pale. At 8:30am Trish and Jon took her to Stamford Hospital, where she was checked by the doctor. Her chest, temperature and vital signs were ok and they were sent home with a caution to keep an eye on her temperature and to take Lucie to Accident and Emergency if her temperature peaked or if she continued not to feed.

At 10:30am Jon looked at Lucie, who was still not feeding and decided that she needed to go to hospital. By 11am she was being checked by the staff at Peterborough District Hospital A & E. Her blood glucose was low and the decision to admit her happened a hour or so later. Once on the Amazon Children's Ward the staff eliminated heart problems, and bleeding on the brain and were sure they were now dealing with an infection and various antibiotics were administered. Her blood pressure kept dropping and her breathing was fast and shallow. She was moved to the High Dependency area on the ward. She went into respiratory arrest and Jon and Trish thought they had lost her. Ten minutes later she was breathing on her own again.

The team at Peterborough decided she needed more specialist care and plans were put in place to move her to Leicester Paediatric Intensive Care Unit (PICU). It was 9:30pm by the time the team from Leicester arrived and transferred Lucie into their portable incubator. Lucie was very sick, her blood pressure was all over the place and her fontanelle was bulging. A CAT scan was ordered at Peterborough before being transferred to Leicester.

At 2:30 am Jon and Trish got the good news that Lucie's CAT Scan was ok and that the swelling had not caused bleeding in the brain. Lucie was on her way to Leicester PICU. On the journey Trish received a call to say that the detailed report by the experts had showed changes in the CAT Scan and Lucie was being diverted to Queens Medical Centre, Nottingham PICU who specialise in neuro-surgery.

5am and Trish and Jon arrived in Nottingham to see Lucie being transferred again to a highly specialised unit. The neuro-surgeons had been called to review her case. At 6:30am Jon and Trish were informed that Lucie had Meningitis, although still no confirmation of the strain. Lucie was unable to breath alone, and her blood pressure could not be stabilised. Her organs could not function without life support and she was effectively brain dead.

The medical staff explained to Jon and Trish that they needed to prepare themselves to say goodbye to their daughter, and that there really was nothing that that medicine could do to save little Lucie. A neuro-specialist spent a further hour ultra-sounding Lucie's brain to check if anything further could be done. The blood supply was bypassing her brain stem, and both left and right lobes. It was time to let her go.

Jon and Trish had Lucie Christened and spent the day saying goodbye before she passed away at 4pm on Monday 1st November 2010.

Meningitis is a silent killer and can kill in as little as 4 hours.  Help us to help other families avoid this loss by donating to For Lucie. 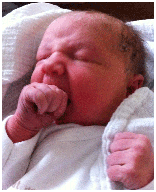 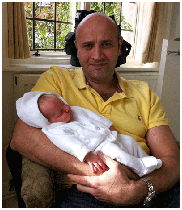 Jon and Lucie on a family day out